From the anime movie “My Hero Academia The Movie: World Heroes’ Mission” comes a Nendoroid of Shoto Todoroki in his costume original to the movie! His stealth suit has been faithfully recreated in Nendoroid form. He comes with three face plates including a standard expression, a combat expression and a perplexed expression.

Fire and ice parts for recreating his “Half-Cold Half-Hot” Quirk are included, allowing you to create all kinds of action-packed poses. Be sure to add him to your collection along with Nendoroid Izuku Midoriya: Stealth Suit Ver. and Nendoroid Katsuki Bakugo: Stealth Suit Ver.! 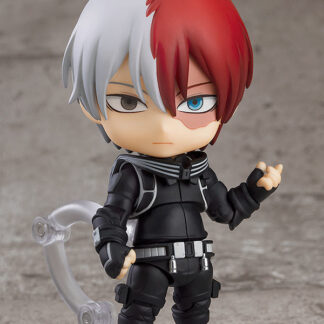