From the popular anime series “Demon Slayer: Kimetsu no Yaiba” comes a figma of Zenitsu Agatsuma!

· Using the smooth yet posable joints of figma, you can act out a variety of different scenes.
· A flexible plastic is used for important areas, allowing proportions to be kept without compromising posability.
· He comes with three face plates including a standard face, a crying face and a sleeping face.
· His Nichirin Blade is included as an optional part.
· Additionally, the DX edition comes with a blushing face and three different effect parts to recreate his Thunder Breathing First Form: Thunderclap and Flash attack.
· An articulated figma stand is included to display the figma in a variety of poses. 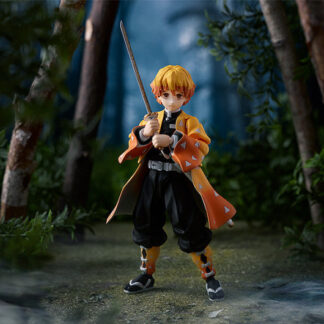