From Nickelodeon’s “The Legend of Korra”, the sequel to “Avatar: The Last Airbender” comes a rerelease of the Nendoroid of the main character, Korra! She has been shrunk down into cute Nendoroid size with a tough, confident expression that captures her personality and charm, and an alternate expression of her in the avatar state is also included! Korra can be displayed with her feet firmly grounded preparing herself for a battle, or instead jumping through the air with special water, earth, fire and air bending effect parts! Her hair is fitted with joints and the effect parts each have their own stands that can be moved around to suit various different poses! 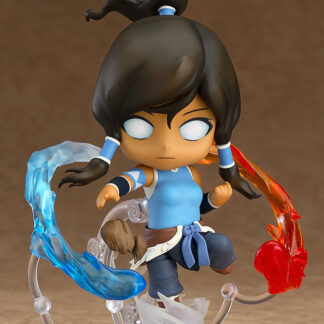