“…Either we all die or we all survive. Which is better?”

From the anime series “BLACK ROCK SHOOTER: DAWN FALL” comes a Nendoroid of Empress [Black Rock Shooter]! She comes with two face plates including an innocent standard face and an intense combat face. Optional parts include her handgun, her poncho and a blue flame effect part. She can also be posed with her Coil Gun* to create action-packed scenes in Nendoroid form. Be sure to add humanity’s last hope, Black Rock Shooter, to your collection! *A Milight 316 Series LED (Released by: Hiromi Sangyo) can be installed into the coil gun to display it lit up. 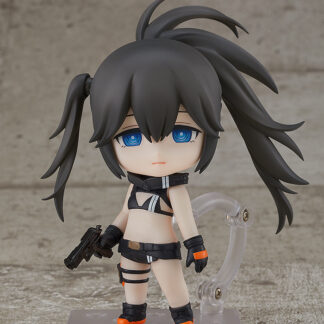