Bloodlust blacks out all else.

Presenting POP UP PARADE figures now in a larger size! POP UP PARADE is bringing figure fans a brand new sense of excitement with the L line. From the popular manga “Berserk” comes a POP UP PARADE L figure of Guts wearing the Berserker Armor. The figure stands at approximately 280mm in height (including the vignette base). Guts’ appearance from the cover illustration of the manga’s 28th volume has been impressively captured in figure form. In addition to the standard head part, a head part that can be used with a Milight 316R (released by: Hiromi Sangyo) LED to create a glowing eye effect is included as well. *Please note that the Milight 316R (released by: Hiromi Sangyo) is not included in the product. 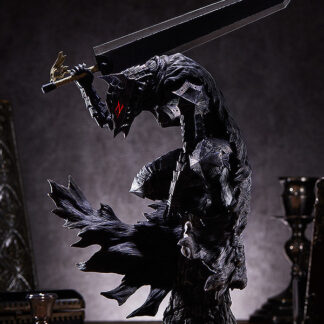